Do not let your doctor scare you into some aggressive therapy before considering this website and doing some heavy reading (study) of your own. Consider reading the story Abstain From Doing Harm in Men’s Personal Stories, as an illustration of one man’s journey through this mine field, and articles from other men’s journeys in PCa. Keep in mind there are two urologists at St Vincents Hospital, Sydney, who have done 4,000 and 6,000 RPs charging fees of A$30,000 and A$20,000 respectively. Do the maths to comprehend the commercial reality of expecting unbiased advice from such surgeons. Remember in 1935 Upton Sinclair summed up the problem you are facing very neatly when he wrote “It is difficult to get a man to understand something when his salary depends on not understanding it.” 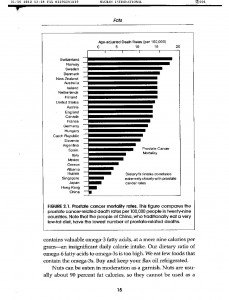 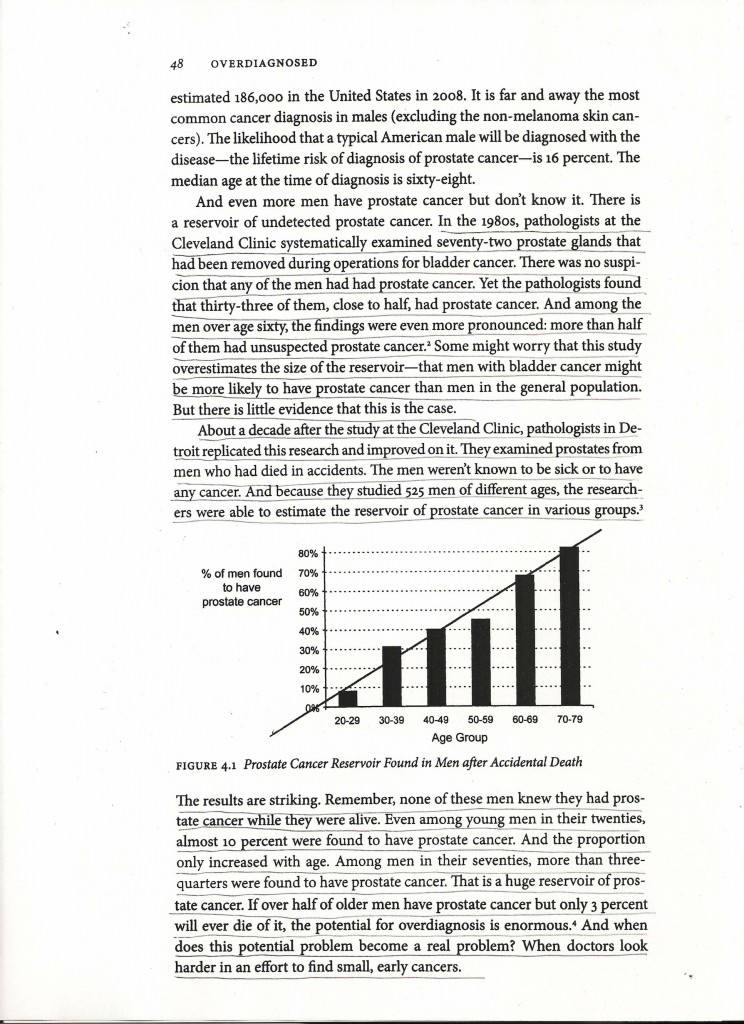 Do not be persuaded by some of the statistics that suggest the very nasty potential side effects are better than unacceptable. A way to make things look better than they are for 70 years old (about the most likely age to be consulting about PCa) is to quote stats that include mostly 50 years old – for whom the outcomes are clearly better – have a look at the graph above which shows your chances of having PCa varies according to age – in a linear manner. For men in their 70s the liklihood of having PCa is 70% and you may have had it for decades.

Study the suggested solutions (in Erectile Dysfunction) to the almost certain erectile dysfunction, such as direct injecting your penis, having an insert implanted in your penis that can be pumped up by a pump and switch implanted in your scrotum. None of these things will give you the previous pleasure of normal sexual function and in the case of direct penile injections you run the risk of losing your penis following an erection that will not go down, causing clotting and tissue death, if urgent hospitalisation is not available.

It is common for a urologist to warn you that you have identified PCa, it is pushing against the side of the capsule and if it get out you will have untreatable metastasies. This creates urgency, fright and will substantially reduce the amount of time you have to consider your options. Resist it!

If your disease is Gleason 6, or less, or only a tiny proportion of Gleason 7 then watchful waiting, also known as active surveillance, is well worth considering. http://www.medscape.com/viewarticle/769966?src=nl_topic

Some of his comments are:

“Active surveillance works and is dramatically to be preferred to surgery.”

“You are buying into a lot of damage with a procedure (for Gleason 6) that is experimental, as it has not been established.”

“I think radical prostatectomies for Gleason 6 are criminal and being driven by the financial need of the surgeon – don’t help them buy their next Mercedes.”

Using only a change in diet – including a range of supplements, lifestyle, exercise, all chosen to boost your immune system, may cause the PCa to regress to the point of insignificance. Ultrasound and DCE-MRI then give you the ability to measure how successful you have been without any holes, surgery, chemotherapy, or life-changing radiation. Look at the relationship between countries consumption of animal fats and PCa – please open attachment Prostate fat to death graph.

Please read the David Froggatt story (Men’s Personal Stories) as he is the first man we know of to start with a global (multicore) biopsy that diagnosed Gleason 9 PCa, followed by an ultrasound scan (Dr Bard NYC) – that confirmed the biopsy results (though not the most aggressive rating of Gleason 9) he had at St Vincents, had hyperthermia (at Klinik St Georg), followed a week later by another ultrasound scan in NYC saying he was clear of cancer!

Ian Duncan’s blog link gives a very full description of his experience in deciding on hyperthermia at Klinik St Georg.

Costly Prostate Therapy Common When Docs Own the Machine

A new study of an intensive and expensive form of prostate cancer therapy finds that doctors who stand to profit from the treatment are twice as likely to recommend it, even though there is no definitive evidence that it is better.

The treatment, known as intensity-modulated radiation therapy or IMRT, typically costs more than $31,000 while options costing about half that – or less – are available.

For instance, there is little evidence that it helps patients live longer, said the study’s author, Jean Mitchell of Georgetown University in Washington, D.C.

Published in the New England Journal of Medicine, the study was financed by the American Society for Radiation Oncology, whose members have done IMRT therapy for years but have been losing business to the urologists who have bought their own IMRT machines and hired radiation specialists to operate them.

Federal law prohibits what is known as self-referral, when doctors send patients for tests or treatment from which the physician stands to gain financially, but makes an exception for “in house” services.

The urologists are taking advantage of a loophole in federal law that doesn’t make it a conflict of interest for the doctors to benefit from such an arrangement, Mitchell said.

The society released a statement quoting its chairman, Dr. Colleen Lawton, as saying the “study provides clear, indisputable evidence that many men are receiving unnecessary radiation therapy for their prostate cancer due to self-referral.”

The American Urological Association (AUA) responded by releasing a statement alleging the new study has “inherent biases and flawed methodologies” and questioning whether Mitchell “chose the control groups to arrive at results that were acceptable to the study’s sponsors.”

In July, when the U.S. Government Accountability Office (GAO) issued a report that reached a similar conclusion to that of the new study, the AUA and other urologist groups called that report “flawed and misleading,” saying the GAO “provided no evidence that patients were being provided radiation therapy inappropriately” by groups that had acquired IMRT.

The current study is only the latest to show that doctors tend to order more tests and treatments or to select particular treatments over others when they have a financial interest in those services.

“I don’t think this is any different than oncologists who might give a more expensive cancer drug because 6 percent of a more expensive drug brings more money into a practice than 6 percent of a cheaper drug,” said Dr. Bruce Roth, an oncologist at Washington University School of Medicine in St. Louis who was not involved in the new research. “It’s one more symptom of the underlying problem of reimbursing people for doing more stuff to patients.”

However, he said that the current study is incomplete because, for example, it did not attempt to survey urologists to determine their motivation for more referrals to IMRT.

“The wrong thing to look at is total cost,” he said. “It’s no doubt that (IMRT) costs more, but it’s probably better than conventional radiotherapy. But if you’re going to make the hypothesis that the urologists are doing it for financial reasons, you should look at the flow of money back to the physicians, not just the costs, because this technology doesn’t come free and all of that difference in dollars isn’t flowing into the urologists’ pockets.”

Nearly 241,000 U.S. men are diagnosed with prostate cancer each year and the 10-year survival rate is 98 percent. The tumor often grows so slowly, a man will die from some other cause before his prostate tumor has a chance to kill him.

“You have to question (IMRT therapy) for men who are late 70s and into their 80s who are more likely to die from something other than their prostate cancer,” Mitchell said. “Medicare is paying a lot of money for aggressive treatment of prostate cancer where it’s basically not going to change anything in terms of giving a patient more years of life.”

The new study looked at Medicare claims for men who had just received a diagnosis of prostate cancer but the tumor had not spread. Treatment options in those circumstances include watching the tumor to see how fast it is growing, hormone treatment, surgical removal or implanting radioactive seeds into the tumor to try to kill it.

At the beginning of the period, before IMRT treatment accelerated, it was used in 13.1 percent of cases by urology groups that were destined by the end of the study to buy their own machines. Ultimately, those groups were sending 32.3 percent of their patients for IMRT therapy.

In contrast, among doctors who didn’t stand to make money from IMRT, the rate of referral barely grew, rising just 1.3 percentage points from 14.3 percent to 15.6 percent.

“Their behavior didn’t change at all,” Mitchell said in a telephone interview. “Given the lack of difference in clinical outcomes, if you’re a patient you have to ask yourself why you’re getting this extensive treatment. I know one of these centers has limousine service that picks people up 50 miles away.”

The July GAO report also looked at IMRT use on Medicare beneficiaries, covering a shorter time period from 2006 to 2010. It found urology groups that recommended IMRT for 37 percent of patients before they acquired the equipment themselves ended up referring 54 percent of patients for the treatment afterward.

Setting up a center typically requires a capital investment of $2 million, Mitchell said, citing marketing materials from one company that told urologists by treating 1.5 new patients a month with IMRT they can each generate $425,000 per year in additional revenue.

Roth said patients should be wary of such arrangements.

In its statement Wednesday, the AUA said such ownership arrangements “should be transparent and in the patient’s best interest,” and “patients should be reassured that their urologic care will not be disrupted or penalized if they seek an alternate physician supplier or provider of IMRT.”

“It is difficult to have a man understand something when his salary depends on not understanding it.”