Prostatitis, Benign Prostate Hypertrophy (BPH), and Prostate Cancer are the most common types of prostate disease. Millions of men are diagnosed with one of these disorders every year. Most are given aggressive forms of therapy. The lucky ones are those with a solid sense of self worth, an enquiring mind and a determination to have the rest of their lives as whole functioning happy males. None of the radical prostatectomy outcome studies encompass depression, or survival beyond 5+ years, yet PCa has been with most men for many more years than that without being a problem.

Prostatitis is chronic inflammation of the gland. This is due to low immunity allowing the infection of the gland to cause inflammation and swelling of the gland. This causes pain on urination, ejaculation, frequent urgent calls to empty the bladder, pain when evacuating the bowels. Usually the treatment is to administer strong antibiotics that also kill off the natural gut flora and further reduce your immune system, which is 90% derived from the food you digest, but cannot fully digest when the gut flora has been killed off. So unless you deliberately boost your immune system you will be worse off than before the antibiotics. Boosting your immune system was all that was required in the first place. 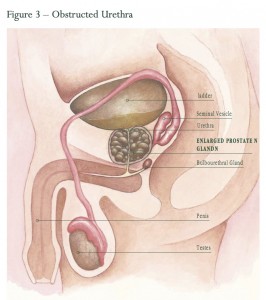 Benign prostatic hyperplasia (BPH), also called benign enlargement of the prostate (BEP), adenofibromyomatous hyperplasia and benign prostatic hypertrophy, is an increase in size of the prostate. BPH involves hyperplasia of prostatic stromal and epithelial cells, resulting in the formation of large, fairly discrete nodules in the periurethral region of the prostate. When sufficiently large, the nodules compress the urethral canal to cause partial, or sometimes virtually complete, obstruction of the urethra, which interferes with the normal flow of urine. It leads to symptoms of urinary hesitancy, frequent urination, painful urination, increased risk of urinary tract infections, and urinary retention. Although prostate specific antigen levels may be elevated in these patients because of increased organ volume and inflammation due to urinary tract infections, BPH does not lead to cancer or increase the risk of cancer. BPH involves hyperplasia (an increase in the number of cells) rather than hypertrophy (a growth in the size of individual cells), but the two terms are often used interchangeably, even amongst urologists. If you consult an oncologist you will get hormones, chemotherapy; a radiologist – radiation; a urologist – surgery. None of them will tell you about other alternatives, most will say that alternatives are unproven, experimental, or dangerous. They will not tell you of the thousands of studies to the contrary, nor will they mention the growing number of current studies and government committee recommendations to stop aggressive treatment because it kills more men than it saves. This website is to tell you a little about the better, alternative ways, with only positive side effects, to rid yourself of these and other disorders by changing your lifestyle and food intake. Benign Prostatic Hyperplasia ( BPH) or enlargement of the Prostate Gland strikes more than 50% of all males over 50, most will have significant prostate enlargement and the rest of the male population over 50 will experience some discomfort.

It begins with urine flow that is hard to start, a weak or intermittent stream and a bladder that still feels partially full after urination.

Surgery rarely produces any long term benefits, but seems to cause a lot of problems and distress.

Purpose of the Prostate

The prostate produces semen and secretes it into the urethra, the tube that runs from the bladder to the tip of the penis. The semen is the clear liquid that the sperm depends on for nourishment and to act as the vehicle to carry it out of the male body and to the intended target.

Problems commence when the prostate begins to enlarge, the prostate is a donut shaped gland that encircles the urethra, it squeezes on the urethra thus reducing the flow of urine, its enlargement is due to hormonal changes of old age.

Another treatment that shows great merit and can be performed at home is through the use of magnesium chloride (MC).

A world war one French Doctor by the name of Dr Joseph Favier discovered some amazing qualities of magnesium chloride which he called the Miracle Mineral.

Among many benefits he found from taking MC were its positive effects on the prostate gland.

He found that by giving magnesium tablets to patients with BPH he was significantly reducing their nocturnal urinations and not only that, after urination the urine retention problems were much reduced.

One patient who had complete urine retention and who was scheduled for operation was given four tablets (2grams) MC, spontaneous urination occurred, the operation was cancelled and the patient was subsequently sent home, the patient had no more trouble just as long as he continued to take MC.

Apparently it is difficult to overdose on MG as the body just dumps any surplus.

The author can certainly swear to the beneficial effect of (MC), I begin taking it about six years ago for this very same reason, the result was as Dr Favier stated, six years later and still taking (MC) daily, I have had no recurrence of any prostate problems, I am now 65 years old and when I urinate there is no hesitancy and definitely no retention whatsoever, as far as I am concerned, MC really works, also, sex is no problem.

Incontinence (urine leakage) Shrinkage of penis size. Inability to achieve an erection. (for some, erections never return) No ejaculation. No more natural (un-assisted) erections and certainly no more morning Glories. Most men who have undergone BPH surgery state: Sex is never the same again.

Magnesium Chloride is not readily available in health stores, for what reason I cannot guess, it is a common salt derived from sea water and cheap when you can find it, it is well worth the search. Magnesium Sulphate (Epsom salts) is not the same thing, nor does it work the same way. Nagari (Nigari) Flakes or Magnesium oil (liquid form) are both MC.

Magnesium oil is available in many health stores but expensive. Magnesium oil is just MC dissolved in hot distilled water until saturation point is reached (water will absorb no more magnesium chloride), Google magnesium Chloride flakes or Nagari Flakes which is Japanese for MC, find a supplier on the net, purchase and make your own magnesium oil. MC really is “The Magic Mineral”

Transdermal application, that is applying the MC oil to soft areas of the skin, such as underarms, thighs, belly etc is the best method of introducing magnesium into the body. Soft skin areas absorb MC much better than taking it by mouth as it by-passes the stomach and liver, going directly into the blood stream. The body in its own wisdom knows exactly where to send it to do the most good, if the Prostate needs magnesium, that is where it sends some, if the heart muscles need magnesium, it looks after that also. The Doctor within is a far better Doctor as it knows precisely what minerals, vitamins etc it needs intuitively, trust it, listen to it, it really does know best.

Mervyn Penny is a retired Australian living in the southern Philippines. He produces a website called healthyoldcodger which is dedicated to health issues effecting the elderly and those approaching old age. He publishes the website under the “nom de plume” Mervyn Ballinger.

Read other articles on the subject of elderly health by visiting:

To learn more on enlargement of the “Prostate Gland” Click on: [http://www.mtpenny.info]